Plantar fasciitis involves pain and inflammation of the band of tissue running across the sole of the foot, the plantar fascia. A major cause of heel pain, many people with plantar fasciitis experience severe pain with the first few steps in the morning after getting out of bed. Plantar fasciitis pain is also exacerbated when walking after sitting for an extended period of time. Essentially, the pain becomes intense when placing weight onto the foot. Pain on the posterior aspect of the heel often indicates achilles tendinitis and pain on the underside of the heel is an indicator of plantar fasciitis.

A total of 74 plantar fasciitis patients from Guangxi People’s Hospital were treated and evaluated. They were randomly divided into two groups of 37, the integrated treatment group and the foot bath only control group. Both groups were given identical TCM foot baths. All patients fulfilled the following inclusion criteria:

A 0.30 mm x 0.50 mm needle was inserted into each acupoint until deqi was elicited. The insertion angle was either perpendicular or at 45°. All needles were manipulated with the mild reinforcement and attenuation (Ping Bu Ping Xie) technique. The skin surrounding the acupoints were then covered with gauze or tissue to prevent falling moxa ashes from irritating the skin. An approximately 2 cm moxa roll was attached to the end of each needle and ignited. Needles were retained until the moxa rolls self-extinguished and the needles cooled. Pressure was applied after removing the needles to prevent bleeding. One acupuncture session was conducted daily for a total of 10 days. The prescription for the TCM foot bath was comprised of the following herbs in equal quantities:

The herbs were decocted in a stainless steel pot. After adding 2,500 ml of water, herbs were left to soak for 30 minutes. Next, the water was brought to a boil with high heat and was subsequently simmered for 20 – 25 minutes at low heat. After simmering, 1,500 – 2,000 ml of the water was removed and kept (1st brew). This process was repeated for the remaining liquid in the pot (2nd brew). The 1st brew and 2nd brew were combined with a small amount of vinegar. This final mixture was used as the foot bath, keeping it at between 40 – 50°C throughout the bath soaking time. One 30 minute bath was applied daily for a total of 10 days.

Foot Acupuncture Point #1
This acupuncture point is located on the sole of the foot at the midpoint between the medial and lateral malleoli. Foot acupuncture point #1 is indicated for the treatment of neurasthenia, hysteria, insomnia, and low blood pressure. Its sedative effects are often remarkably effective. It’s located makes this acupoint suitable for the treatment of plantar fasciitis. 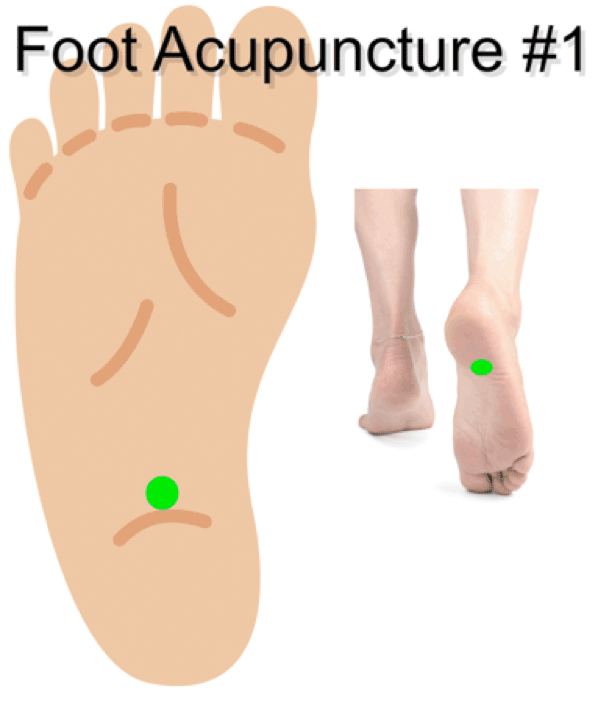 KD2 (Rangu)
This acupuncture point is located on the medial aspect of the foot, distal and inferior to the medial malleolus in the depression that is distal and inferior to the navicular tuberosity. Rangu, translated as blazing fire, is a ying-spring and fire point of the kidney channel. This acupoint clears deficiency heat, benefits the kidneys, and regulates the lower jiao (burner). KD2 benefits patients with plantar fasciitis and is used for the treatment of painful throat obstruction, pain at the medial aspect of the foot, and xerostomia.

N-LE-48 Chuqixue (Vent Gas Orifice)
This point is located 0.5 cun posterior to KD2 (Rangu). A slanted needle insertion of 0.5–1 cun is often used. Chuqixue may be used for the treatment of plantar fasciitis or dissension along the gastrointestinal tract with gas in the later stage of cancer of the esophagus.

AhShi Points
Often there is discomfort in the depressions located approximately 1 cun inferior to BL62 (Shenmai) and KD6 (Zhaohai). These acupoints are suitable for the treatment of plantar fasciitis.

The aforementioned research is not an isolated finding. Guangzhou Dongsheng Hospital and Guangzhou Social Welfare House researchers (Tang et al.) performed a meta-analysis of 19 independent plantar fasciitis clinical trials. A total of 16 of the 19 studies made extensive use of Ahshi acupuncture points. Based on the data, the researchers determined that acupuncture is effective for the treatment of plantar fasciitis. The following are some of the studies included in the meta-analysis.

Next, moxibustion was applied to Ashi points on the heel for 10 minutes. Acupuncture and moxibustion were administered once per day for a period of 6 days, comprising one course of therapy. The second course of care started two days after the completion of the first. After two courses of acupuncture and moxibustion therapy, the acupuncture group significantly outperformed a control group that received ibuprofen sustained release capsules and the herbal formula Zhuanggu Guanjie Wan (Strengthening Bone and Joint Pills).

Acupuncture has a proven and lengthy track record for producing significant positive patient outcome rates for patients with plantar fasciitis. The data indicates that access to acupuncture, moxibustion, and TCM herbal foot baths is an adequate solution for the vast majority of patients.

The selection of dermatomes for sham (placebo) acupuncture points is relevant for the outcome of acupuncture studies: a systematic review of sham (placebo)-controlled randomized acupuncture trials
The Neuroimmune Basis of Acupuncture: Correlation of Cutaneous Mast Cell Distribution with Acupuncture Systems in Human
Electroacupuncture for Primary Insomnia: A Randomized Controlled Trial
Effect of True and Sham Acupuncture on Radiation-Induced Xerostomia Among Patients With Head and Neck Cancer A Randomized Clinical Trial
Clinical Evidence for Association of Acupuncture and Acupressure With Improved Cancer Pain: A Systematic Review and Meta-Analysis
Clinical Effects Of Acupuncture On The Pathophysiological Mechanism Of Chronic Obstructive Pulmonary Disease During Exercise
Acupuncture Versus Cognitive Behavioral Therapy for Insomnia in Cancer Survivors: A Randomized Clinical Trial
Acupuncture for Chronic Severe Functional Constipation A Randomized Trial
Acupuncture and Laser Acupuncture as Treatments for Emotional Distress in Infertile Women in Japan
A clinical trial ofacupuncture about time-varying treatment and points selection in primary dysmenorrhea
The anatomical basis for transcutaneous auricular vagus nerve stimulation
Single Cupping Therapy Session Improves Pain, Sleep and Disability In Patients With Nonspecific Chronic Low Back Pain