Traditional preparation of three herbs relieves and reduces symptoms of disease in mice and tests on humans are encouraging, study finds

A traditional Chinese medicine known as smart soup (聰明湯) could help in the fight against Alzheimer’s disease, scientists on the mainland believe.

The simple treatment helped relieve and even reverse Alzheimer’s symptoms in mice that had been genetically modified to acquire the disease, researchers with the Chinese Academy of Sciences’ Institute of Biochemistry and Cell Biology in Shanghai found.

The researchers believe that chemicals in the herbs both inhibit the growth of amyloid-beta, an amino acid thought responsible for Alzheimer’s, and protect neurons from its effects. 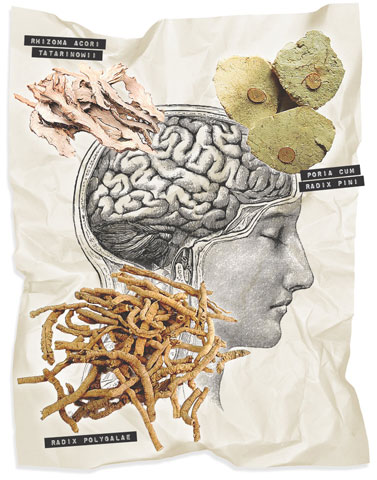 Alzheimer’s disease is one of the biggest threats facing the elderly – it has been diagnosed in about 30 million people across the world and that figure is expected to double every 20 years, according to the World Health Organisation. Sufferers face increasing cognitive problems including speaking impairment and memory loss.

Mice treated with the smart soup regained the ability to find hidden platforms and their memory also showed improvement, researchers said. When faced with a new object, they would explore it for significantly longer than they did before they were treated, which researchers said was evidence of improved memory.

The findings were published in the online scientific journal PlosOne this month.

Dr Zhao Jian, associate researcher with the Shanghai institute and co-author of the paper, said the smart soup had also showed promise in early tests on humans. The team had been collaborating with hospitals in Shanghai for two years, monitoring volunteer patients taking the medicine, she said.

The goal of the research project, funded by government agencies including the National Natural Science Foundation of China, the Ministry of Science and Technology and the municipal government of Shanghai, is to develop safe, universally effective, low-cost therapies to fight and prevent Alzheimer’s.

“We not only want to cure the disease, but to prevent it before the occurrence of serious symptoms. The medicine not only needs to be effective, but affordable to the mass population,” Zhao said.

“The smart soup now looks like one of the most promising candidates, which comes with low cost, proven effectiveness and some likely general benefits to the brain.”

Zhao said the research had been “extremely difficult” – it had taken the team more than two years to decipher some of the chemical mechanisms involved.

Alzheimer’s is believed to be mainly caused by amyloid-beta, or abeta, a protein fragment molecule found in the brains of sufferers. The growth of abeta molecules can damage neurons and affect the normal functioning of the brain.

The scientists found the smart soup, or more specifically the radix polygalae, could significantly reduce the generation of abeta, with the levels in treated mice more than 18 per cent lower than in those untreated.

Zhao said the development of Alzheimer’s was a long process. Some patients acquired the disease nearly two decades before symptoms appeared.

But the experiments showed the effect of smart soup was greatest when administered before the disease fully developed.

“The earlier the treatment, the better the results. That’s why we are very interested in the smart soup’s potential as a preventive therapy,” she said. However, she cautioned that the research was still in its early days: “The formula, though only herbs, was still a medical prescription. Until future research confirms it is safe for healthy people, we do not suggest massive use of the therapy on normal populations.”

Zhong Jian, a Chinese medicine doctor in Guangdong, said smart soup had been around for hundreds of years and was commonly prescribed to patients with brain diseases such as Alzheimer’s. The first official record of it appeared in Gu Jin Yi Jian, a medical book published in 1576. “Chinese medicine has many formulas with good clinical results but poor recognition by Western medical society, because we don’t know how to explain it in the language of modern science,” Zhong said.

Hua Zhou, associate professor of pharmacology at the Macau University of Science and Technology, said the paper was scientifically robust.

“The three herbs have been used by traditional medicine doctors for a long time. They can be found in any Chinese herbal pharmacy,” he said. “But the animal tests are only the first step. How, and to what extent, the formula can be used against the disease will depend on the final results from comprehensive and rigorous clinical trials.”

Armed with cutting-edge technology, mainland scientists have made numerous experiments on the effectiveness of traditional Chinese medicine.

Last month, a team at Nanjing University reported evidence showing honeysuckle could be used to treat the flu virus.

They found a gene of the herb could suppress the replication of the virus in rats’ lungs and blood, significantly reducing deaths from viral strains such as H5N1, according to their paper in the scientific journal Cell Research.

The selection of dermatomes for sham (placebo) acupuncture points is relevant for the outcome of acupuncture studies: a systematic review of sham (placebo)-controlled randomized acupuncture trials
The Neuroimmune Basis of Acupuncture: Correlation of Cutaneous Mast Cell Distribution with Acupuncture Systems in Human
Electroacupuncture for Primary Insomnia: A Randomized Controlled Trial
Effect of True and Sham Acupuncture on Radiation-Induced Xerostomia Among Patients With Head and Neck Cancer A Randomized Clinical Trial
Clinical Evidence for Association of Acupuncture and Acupressure With Improved Cancer Pain: A Systematic Review and Meta-Analysis
Clinical Effects Of Acupuncture On The Pathophysiological Mechanism Of Chronic Obstructive Pulmonary Disease During Exercise
Acupuncture Versus Cognitive Behavioral Therapy for Insomnia in Cancer Survivors: A Randomized Clinical Trial
Acupuncture for Chronic Severe Functional Constipation A Randomized Trial
Acupuncture and Laser Acupuncture as Treatments for Emotional Distress in Infertile Women in Japan
A clinical trial ofacupuncture about time-varying treatment and points selection in primary dysmenorrhea
The anatomical basis for transcutaneous auricular vagus nerve stimulation
Single Cupping Therapy Session Improves Pain, Sleep and Disability In Patients With Nonspecific Chronic Low Back Pain